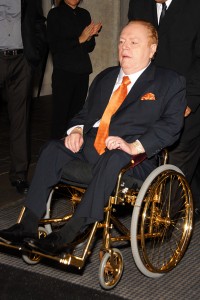 Larry Flint, to me was one of America’s first solders and patriots that not only fought for our basic freedoms of liberty aboard the USS Enterprise, as he served in the Navy from 1960 to 1964, but it was what he did in 1974 that would forever change the way we see him and mass media, and what freedom of speech and publication truly meant, when he published the first skin, magazine called Hustler, In November 1974, Hustler showed the first “pink-shots,” or photos of open vaginas. Flynt had to fight to publish each issue, as many people, including some at his distribution company, found the magazine too explicit and threatened to remove it from the market. In 1975 even the former first lady of the United States Jacqueline Kennedy was even featured in his early magazines, he purchased those pictures for a shocking $18,000. And in August 1975 he published those pictures. That issue attracted so much widespread attention that over one million copies were sold within a few days.

All the media attention from his magazine sales did not always promote positive attention from religious groups and other mass media outlets and in 1978 he was shot by a sniper standing near an alley across the street from one of the many court rooms he would step into within his life span trying to defend his free speech. The shooting left Flynt partially paralyzed with permanent spinal cord damage, and in need of a wheelchair. Flynt’s injuries also cause him constant, excruciating pain.

For the most part over the years I think Larry Flint has won, the battle with mass media, and to me he deserves to be added to the Smithsonian’s opening exhibit as an early pioneer, because I do believe without his insight and vision of publishing risquÃ© and yes nude pictures before it was popular, and his admiration to not only stand tall in the face of justice and be willing to go to jail, and forever be in the spotlight as the man who is forever embodied in a wheel chair for his beliefs in free speech.

I do not know of anyone that is more or less deserving than a man who was an American soldier who protected our basic freedoms while in uniform and after his honorable service to this country he still continues defending those freedoms to this day in our court rooms accost this great land.