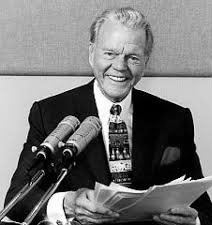 How many radio broadcasters today would be wearing a tie and coat while speaking to the country on air?

And on the 8th day, God looked down on his planned paradise and said, “I need a caretaker.” So God made a farmer.

Those words, were delivered to a modest gathering in 1978, during an address to the Future Farmers of America convention. Those words resonated again, 35 years later, when 108 million people tuned in to Super Bowl XLVII (47), and heard the voice of a legendary American radio broadcaster say, as only he could say it, “So God made a farmer.’ The Dodge Ram trucks Super Bowl ad, The Farmer, was one of the most talked about for days to come.

I’ve heard the Smithsonian is opening a new exhibit to showcase the best and brightest in media. I think I’ve got a winner here folks. Let me tell you the story about the man behind the voice that millions of people heard in The Farmer commercial.

The broadcaster, whose voice America heard, was born in 1918, and grew up in Tulsa, Oklahoma. His dad, Harry Aurandt, was a policeman, who was murdered when his son was three. His mom, Anna, was a native of Denmark. A high school teacher, impressed with his voice, recommended a job at the local radio station and at age 14 his first gig at the radio station was cleaning up around the place. Soon though, he started getting opportunity to read commercials and the news on air. His career in broadcasting just took off from there, and at age 19 he was a managing a radio station.

Over the years he worked as announcer, newscaster, reporter, and more. He covered the U.S. Navy in Hawaii, and served a brief time in the U.S. Army, but was discharged only after a few months, which, later in life, drummed up some controversy. In 1944, he ended up in Chicago working for an affiliate of ABC Radio Networks. He regularly questioned American security and in 1951 he literally jumped the fence into a nuclear test facility near Chicago, to prove a point, was caught, and concocted quite the story. In 1952 it was known he was friends with FBI director Edgar Hoover but his actions over the years had resulted in an FBI investigation and by 2010, more than 1400 pages in an FBI file.

His scope of broadcasting grew and his emphatic voice and patriotic yet independent perspective started to become familiar, and welcomed, in households around the country. In May, 1976, he started a new series that grew to six broadcasts a week and ran for 33 years. His radio programs reached as many as 24 million people a week and were carried on 1,200 radio stations, 400 Armed Forces Network stations and also in 300 newspapers. He touched the lives of millions as his voice carried over the air waves.

In 2005, he was awarded the Presidential Medal of Freedom, the United States’ most prestigious civilian award, by President George W. Bush.

He died, at age 90, in 2009. Part of his obituary read, “He championed rugged individualism, love of God and country, and the fundamental decency of ordinary people.’

And, now, you know… the Rest of the Story.

Works Reviewed for this Assignment

One thought on “Week 2, Assignment 3: Wyman”