There are many deserving individuals for the Smithsonian exhibit to showcase the best and brightest in mass media. I believe that Mark Zuckerberg is an excellent candidate to include because of his remarkable accomplishments in the creation of “Facebook’. Facebook has become one of the most revolutionary websites of the 21st century connecting people across the world. As of July 2014 Facebook has passed 1.23 billion active users, this represents almost the population of China. This is truly an astonishing number that illustrates the breadth of this media. 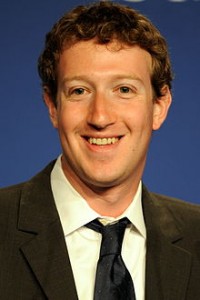 was not originally created to be a company. It was built to accomplish a social mission – to make the world more open and connected’ – Mark Zuckerberg

What Facebook has done for the mass media is amazing. Zuckerberg had a vision of connecting people through the internet. Although Facebook started off as just a project by a few Harvard students, he quickly realized its potential, expanded it to other schools with the hope that the same positive feedback would come of it. Through all the continued success of Facebook Mark Zuckerberg also had to deal with negative public perception. Soon after the launch of Facebook, he had former roommates and classmates at Harvard file a lawsuit against him claiming a share in the company based upon their involvement. This resulted in a costly settlement. To undergo allegations that the foundation you built a company on were based on lies and deception must have been very hard for Zuckerberg to handle, but the tenacity he has demonstrated to conquer adversity has been nothing less of extraordinary.

Mark Zuckerberg did not complete his Harvard education. In his sophomore year at Harvard he dropped out to continue his pursuit of creating Facebook to become a social media behemoth. Not unlike other successful media innovators like Larry Ellison, co-founder of Oracle, Michael Dell, founder of Dell computers and Steve Jobs, co-founder of Apple. He created the stepping stones to what is now known as “social media’. If net worth was the only precursor to be included in the exhibit, Mark Zuckerberg would be the ‘candidate of choice’. As of July 2015 his net worth is approximately 39.5 billion. However, with his immense wealth he only draws a salary of one dollar a year as Chairman and CEO of Facebook, and has turned to philanthropy to help others in need. In 2013, he donated almost one billion dollars to the Silicon Valley Community Foundation, exceeding the donations of philanthropists Bill Gates and Warren Buffett.

In conclusion, Mark Zuckerberg should be included in the exhibit because he has proven to be a modern innovator of social change in the mass media environment. Facebook will enhance communication and human interaction for future generations to come.

One thought on “Week 2 – Assignment 1: Mullally”