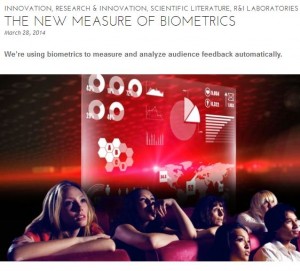 Have you ever been at the movies and watched an especially dramatic moment on the big screen, perhaps one that makes you want to cheer in favor of the hero or maybe a scene so sad tears well up in your eyes? Some people go ahead and let out that cheer in the middle of the theatre while others stifle any such outburst. Similarly, some quell the tears while others let the tears flow freely. What about a scene in a movie that made your pulse quicken and your heart to thump in your chest? To a movie maker, knowing the audience reaction to their construct on screen can be valuable. Polls and surveys don’t necessarily tell a movie maker or the studios that back the movies what a viewer actually experiences and feels when watching a movie or television show. Imagine if sensors read your emotions and physiological responses while you watch movies or television and cable programs? Think this is the stuff of science fiction? Think again. Technicolor announced in March, 2014, they are already using technology dubbed “Empath,’ that uses “biometrics to measure and analyze audience feedback automatically.’ (Technicolor.)

What does this level of technology mean for television programs in the future and what might they look like?

It is a bit scary to think of such technology evaluating our body language and vital signs to what we watch on TV. Technicolor says their technology “can offer filmmakers and other entertainment creators an effective tool by which to measure an audience’s response to key scenes, events, character portrayals, etc.’ Since humans are hard wired to have certain reactions to stimuli — think fight or flight — many of the physiological and emotional responses, some which manifest through facial and body language and could be detected, come from deep, instinctual places. What if a television program full of violence, revenge, and vigilantism, like the movie John Wick (2014) starring Keanu Reeves, got our blood boiling and sensors note that? Would television programming then include more of such content since the “smart box’ noticed our heart beat increase when watching that movie? Would that in turn help promulgate more violence, revenge acts, and vigilantism among society members? That would be a dangerous meddling by the media in the fabric of our society.

Or, would those people who react more to the violence and vigilantism end up getting “delivered’ that content while others, who may have a different or negative reaction to such content, get something a bit more “Mary Poppins-ish?’ This could result in social engineering via mass media on a direct and profound scale the world has never experienced. Tehnicolor reports, “Through our tests, we have already found that sometimes the results can be surprising, in that even a film with a memorable scene that elicits strong biometric responses from the majority of the audience might not be favorably received as a whole.’

So, while the concept seems fairly innocent, fascinating, is intriguing, and even has bit of cool factor, I think it could have some serious negative repercussions. I can envision a future world of television filled with content derived from all the things humans have strong instinctual responses to. The influence of the media would be huge and false in that programming would only show us what the technology “thinks’ we want to see.

And, advertisers would love having the data from such technology. Soon ads would be developed and targeted to illicit the most favorable reaction from each of us that would likely result in us supporting or purchasing whatever is advertised. Via technology, and much like targeted advertising on the web now, television advertisements and even product placement in shows could be delivery on a custom basis and be altered on the fly based on the viewer’s reaction.

Such technology and the related enterprises would be harmful to creativity and prevent many from watching and learning from content that they might not see if a “smart box’ was in charge of what is put on television. Original and creatively developed television and film often inspire and provoke thought. If all were to be conformed to what the masses respond to as measured by a device that could monitor body language and physiological responses I think we would be losing an important aspect of the arts that impact our world. I think Technicolor and other companies (like our example of “Honeycrisp, Inc.’) working on such technology and the FCC and all involved with media need to be very careful with the future and with anything that tries to read our body and minds to give us content to view.

Works Reviewed for this Assignment

One thought on “Week 3, Assignment 4: Wyman”